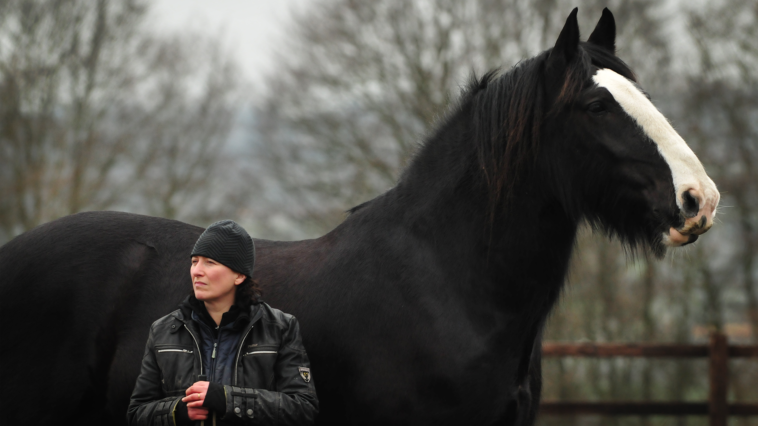 We’re very excited to announce that a documentary which Janice has played an key role in can be enjoyed by UK audiences.

Clydesdale: Saving the Greatest Horse – is produced by the BBC, in partnership with Screen Scotland and the Canadian Broadcasting Corporation, the documentary highlights Professor Janice Kirkpatrick OBE as she shares the story of this magnificent, world-beating heavy horse and describes her passion for saving the breed which has played such a crucial role in Scotland and around the world.

“I’ve always viewed animals as individuals — as collaborators with superpowers who would help me sense things, run faster, jump higher and go further than I could on my own…”

Thousands of Clydesdales horses once roamed the Clyde Valley near Glasgow. Today, they’re all but gone. Passionate about saving the Scottish herd, Janice travels to the heart of the Canadian Prairies where one family has preserved the ancient Clydesdale bloodlines for five generations. Join Janice as she embarks on an unprecedented two-year quest.

Watch on BBC Scotland on 30 December 19:30, or catch up on BBC iPlayer (available UK-wide) until 29 January.

See the trailer below and read the full press release here.

Graven co-founding Director, Janice, has been appointed as one of eight Senior Enterprise Fellows by @UniStrathclyde Read the piece by @ianmcconnellHT here: heraldscotland.com/b… #innovation #entrepreuner #Scotland 1/2

In this exclusive, never heard before clip from Graven Director, Janice Kirkpatrick, you’ll learn all about Snowy, the #Clydesdale horse. You can see Janice and Snowy in the @saveclydesdales documentary, available on BBC iPlayer now. Watch here: bbc.in/3oE7XLk pic.twitter.com/GDdS…

Thank you so much for this lovely comment. Glad you enjoyed it. For all the latest news on the documentary, you can check out @saveclydesdales DM us for anything else :) twitter.com/emmamonk…

If you missed the documentary on BBC Scotland, it’s now on @BBCiPlayer until end Jan. Clydesdale - Saving the Greatest Horse. bbc.co.uk/iplayer/ep…

Thank you for the feature 🙏 twitter.com/horseand…