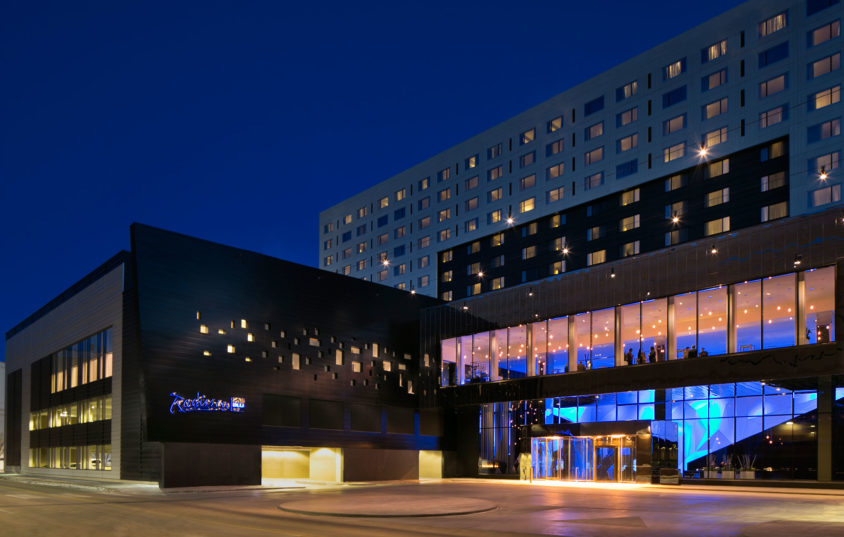 The newly-opened Radisson Blu Mall of America (MOA), directly connected to over 500 shops and restaurants in one of the world’s biggest shopping malls, features stunning interiors by British designer Graven inspired by its unique retail environment; the character and history of its location in Bloomington, Minnesota; and the European design influence, integral to its parent brand’s DNA.

This is the brand’s second ‘outing’ in the USA; its flagship Radisson Blu Aqua in Chicago opened in November 2011 and netted Carlson-Rezidor and Graven a prestigious Golden Key Award for its thought-provoking, contemporary interiors. The Radisson Blu MOA, a mere 15 minutes’ drive from Carlson-Rezidor’s global headquarters, takes the brand’s reputation for pushing design boundaries one step further and demonstrates its parent company’s great energy and ambition. The result is a considered interpretation of context which stays true to the design-led ethos behind Radisson Blu, enhancing the experience of everyone who passes through its doors.

Retail therapy
The Radisson Blu MOA greets shoppers seeking a respite from the hectic atmosphere of the Mall, and business visitors needing a stylish place to meet or stay, with the dramatic vision of the feature Krion wall which forms the backdrop to the entire first and second floor lobby spaces.

Krion, produced by Porcelanosa in Spain, is by its nature a crisp material with a lustre akin to porcelain. For the Radisson Blu MOA, bespoke individual panels have been modelled into a massive multi-faceted sculptural installation which references a cool, pristine shopping bag and serves a similar function, setting the tone for the brand and also protecting and concealing the goods within.

In this instance it shelters Firelake Grill House & Cocktail Bar from the bright lights of the main lobby spaces, so they become the little treats waiting to be discovered. Added drama is injected by lining the inside of the wall openings in bright red Krion. Nest hanging loungers from Dedon are suspended 40ft from the lobby ceiling and hover just above the first floor lobby, inviting exploration.

Flanked by an escalator, a quirky lift and staircase, the unconventional two-level lobby provides a seamless navigation upon arrival, leading guests to not only to Firelake Grill House & Cocktail Bar, but to a state-of-the-art fitness centre, 26,300 square feet of meeting and event space, and 500 guest rooms.

A tiny series of windows puncture the façade at high level on either side of the hotel entrance courtyard, a further nod to its location close to one of the biggest shopping malls in the world. Designer Jim Hamilton of Graven was staggered when he learnt that the official number of annual visitors to the Mall of America is estimated at 40 million a year. “It made me think of fireflies”, he explains, “with their use of bioluminescence to attract mates or prey. When it turns from day to night, the second floor lobby lighting artificially illuminates the tiny windows to the street, bringing the fireflies to life.”

Twin City of Lakes
Graven’s designs for the interiors of Radisson Blu MOA were uniquely influenced by their response to the character and topography of Minneapolis. One of their very first design moves was to propose the introduction of a linking bridge on the front elevation of the courtyard adjacent to the reception. This was inspired by the skyway system that runs throughout Minneapolis, connecting most city buildings to allow the public to walk undercover in the harsh winter months. The MOA skyway serves a similar purpose, managing the flow of people within the hotel during its busiest periods. A double helix DNA pattern, acknowledging Minneapolis and St Paul’s unique status as ‘The Twin Cities’, is the inspiration behind the carpet pattern in both the main and junior ballrooms.

Minneapolis is the Land O’ Lakes. Viewed from the air, the mix of lakes within the landscape inspired Jim to abstract these interesting and unusual ground patterns and colours to create the very strong vibrant rug that sits below hanging loungers adjacent to reception. When viewed from the second floor lobby, this gives a tiny abstract impression of the Minnesotan landscape. Jim explains, “Aerial views when you are coming in to land in different cities all over the globe have always fascinated me. I have taken many photographs through aeroplane windows of a wide variety of terrains. For example, the night time view of Chicago inspired the wall light installation in the Radisson Blu Aqua Hotel.”

Attention to location-specific detail also influenced the choice of materials used within the hotel; the wood that clads the majority of walls, columns, beams and ceilings in the Firelake Grill House & Cocktail Bar was reclaimed from old barns throughout Minnesota, then cut and dressed into very clean, straight and regular planks. This change in detail has merged an interesting little corner of Minnesotan culture with a more contemporary palette of raw materials.

Scandi and Scottish notes
Many Minnesotan families and businesses can trace their background to early settlers from Scandinavia, where the Radisson brand also has its roots. The historical Scandinavian design influence behind Blu can be traced back to Arne Jacobsen’s iconic Radisson Blu Royal Hotel in Copenhagen. The world famous Swan and Egg chairs were designed specifically for The Royal in 1959 and both have been used in Radisson Hotels throughout Europe. The tradition is continued in the Radisson Blu MOA, with a unique colourful version of the Swan chair within the boardroom.

The European influence extends to the ‘Gallery’, a concept first developed for Radisson Blu Aqua in Chicago. In Minnesota this has been extended to incorporate other concepts beyond the wall mounted art pieces. Individually designed or specified pieces such as the Nest loungers and collection of individual, iconic designer chairs in a variety of vibrant red materials that surround a bespoke 40ft Krion table in the second floor gallery area, stand alone as unique, relevant and interesting objects.

A glimpse of the creative talent currently producing exciting work in Minnesota is available within the Gallery, where a mix of pieces procured locally are hung alongside a number by a surprising Scottish interloper, John Byrne. John Byrne hails from Paisley, another city with a mill at its heart but this time in Scotland, near Graven’s home city of Glasgow. The somewhat oblique Minnesotan connection is pop star Prince who is, as most Americans will know, Minnesotan born and bred. The iconic symbol of Prince’s Paisley Park Records company was the Paisley pattern, named for where it was milled in Scotland. As Jim explains “John Byrne’s style is fairly unique but sits very well within the larger group of art pieces selected to showcase local talent. There was a distinctly Scottish flavour within the Carlson and Graven design teams working on both Aqua and MOA. Two of our key clients on Carlson’s side are true born Scotsmen now residing in Minnesota. We have had great fun working with them to establish the Radisson Blu brand in the States.”